Interesting places around the Lake Maggiore

The undulating surroundings and comprehensive nature provides plenty of space for hiking, climbing and mountain biking.Golf lovers have a choice of several beautiful golf courses.

Also beautiful cities like Milan, Varese and Lugano are within short distances and are easily accessible by train or car. Other nearby large and interesting lakes are Lago d'Orta and Lago di Como.

Verbania is the largest town at Lake Maggiore with a beautiful center. It is also the main crossing where you can cross to Laveno with the car on the ferry. Villa Taranto is a famous villa with botanical gardens in Verbania and with some 20,000 plants from around the world a major botanical garden. The house Casa Della Resistenza exhibits pictures about the resistance during the Second World War. It is open to the public from Monday to Friday 15: 00-18: 30 and Sundays from 14.30 to 18.00. Free acces. Verbania has a wonderful lavish decorated with artwork boulevard. Verbania has a small historic center with charming narrow streets where you can find many nice shops, lovely cafes and restaurants. 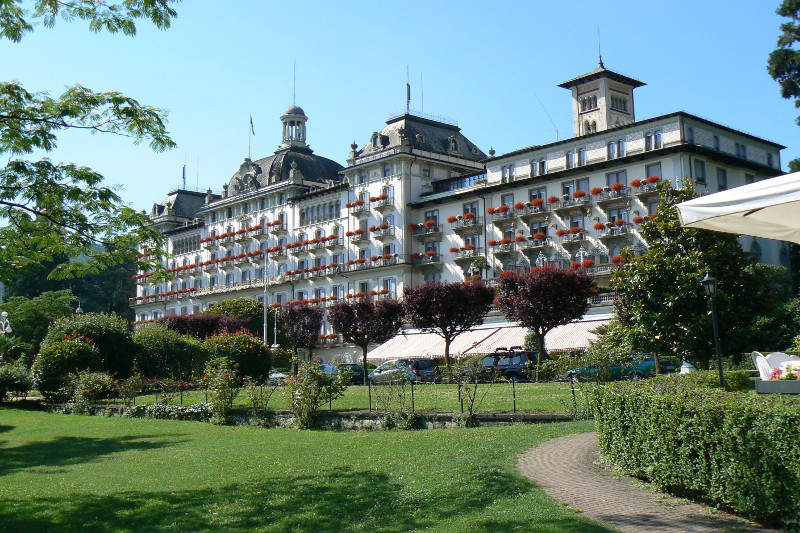 Stresa is situated in a privileged location, this medieval city was a focal point in which figures of the Italian nobility in the nineteenth century settled. The presence nowadays of kings and famous personalities from the world of culture and politics attest to that. The best hotels and villas and Art Nouveau mansions is a delight for visitors. The beautiful town of Stresa is on the western shore of Lake Maggiore overlooking the three Borromean Islands, Isola Bella, Isola Madre and Isola dei Pescatori. Many use Stresa as a collection point for the crossing via the navigation service to the islands. 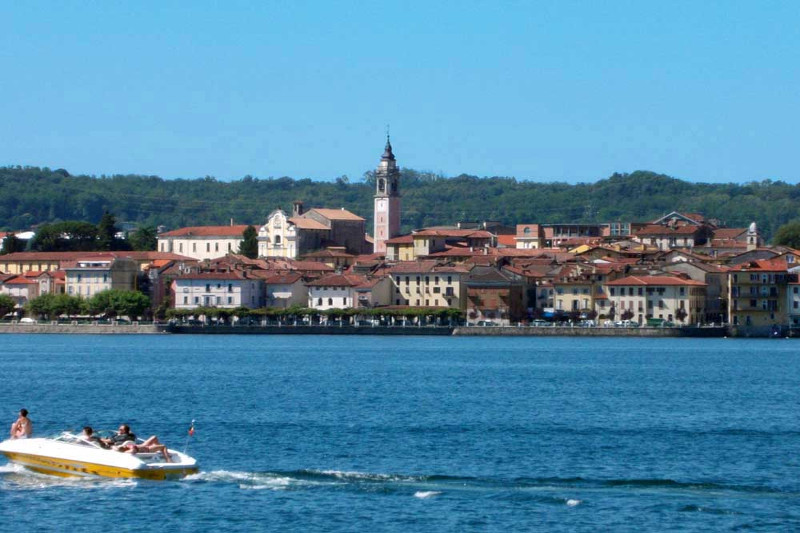 Other documentation contradict this and say Arona city status was in 1838 under Carlo Alberto. The city is known for a bronze statue of 24 meters in height.

The image is located on a hill with a height of 193 meters, a few kilometers north of the city center. The statue is known as the Colosso of Arona. It represents San Carlone Borromeo who speaks to the people. 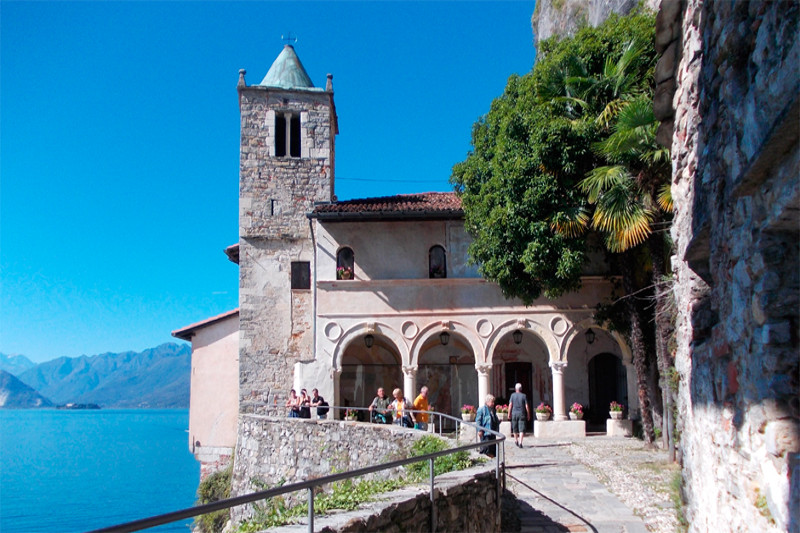 The Hermitage of Santa Caterina del Sasso is a monastery located in the municipality of Leggiuno, in the province of Varese.

It lies on a rocky ledge on the eastern shore of Lake Maggiore. The construction of the monastery dates back to the fourteenth century, although the most recent paintings are arranged in the nineteenth century.

The complex consists of three buildings: the southern monastery, the monastery and church. In 1914 it was declared a national monument.

According to tradition, the monastery was founded by the Blessed Alberto Besozzi of Arolo. A former merchant and usurer who was rescued after a shipwreck, and as a thank vowed to Saint Catherine, and then lived the rest of his life in prayer in a cave near the Hermitage. 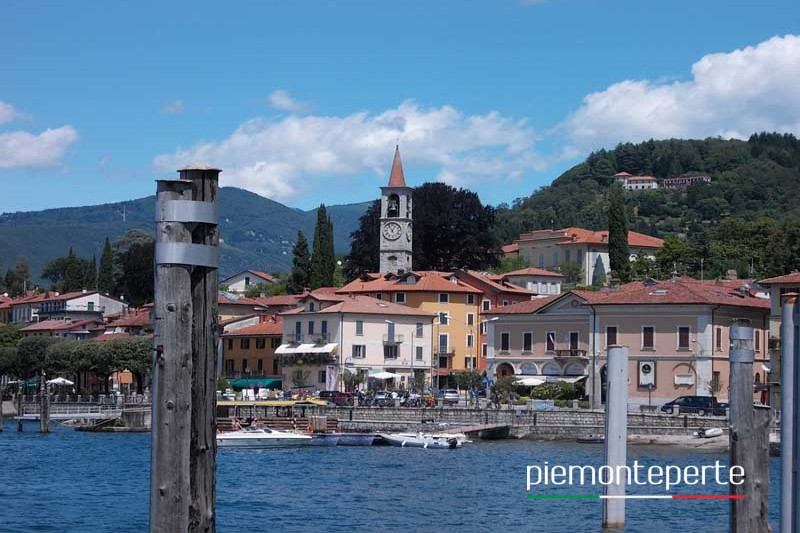 In Laveno you will find one of the largest ports for pleasure yachts of Lake Maggiore.

It is also the largest city which lies on the banks of the Lombard part of the Lago Maggiore. Throughout the year you can take the ferry, including car, crossing the lake to Verbania Intra. The ferry departs several times an hour. An absolute must is a visit to the Monte Sasso del Ferro. In fifteen minutes the cable car brings you to a height of 1062 meters with a spectacular view point with a view of Lake Maggiore, the Alps and even see Milan in clear weather.

The Medieval fortress Castello Forte is worth visiting. 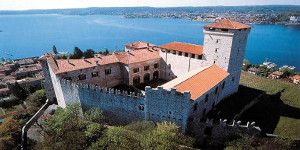 Angera is best known for the massive castle Rocca di Angera. A cliff that overlooks the entire area.

The earliest record of the building dates back to 1066. La Rocca di Angera is open to the public during most of the year and has an impressive collection of antique dolls.

The spectacular views of the majority of the medieval rooms are nicely renovated.

Already in Roman times a reinforced structure was located on the site of the Rocca Angera. Later the property of archbishops of Milan became. In the thirteenth century the building was passed to the Visconti family who rebuilding it as a majestic fortress which dominates the whole area with hinterland. In 1449 it was bought by the Borromeo family, and now still they are the owners of the castle. 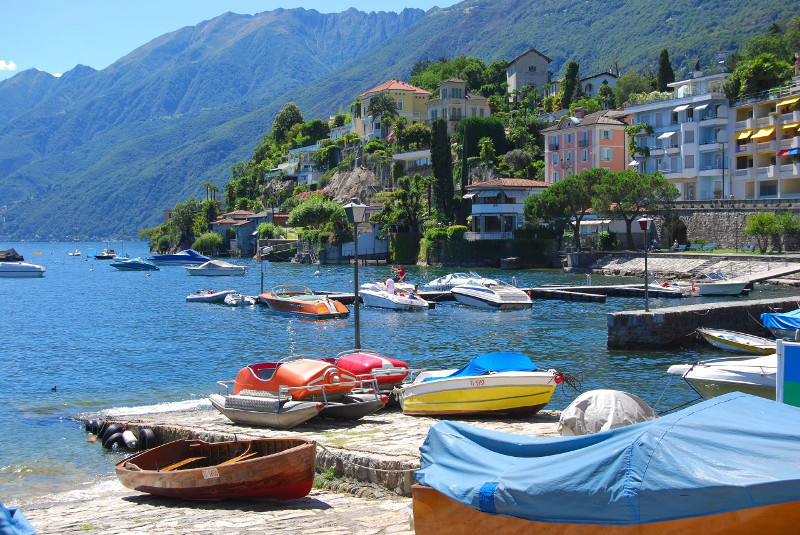 Ascona is known for its lush vegetation. There are to be found in and around the place many agaves, camellias, mimosa trees, orange trees and palms.

Near the village of Ascona is located in Lake Maggiore, the Isole di Brissago islands. Ascona has a small beach called the Lido di Ascona.

Every year in June / July the New Orleans Jazz Ascona Festival music festival is held. The oldest archaeological finds date back to the Neolithic and the Bronze Age.

Ascona received city status in 1428 by Filippo Maria Visconti, and on April 5, 1513 the rights were renewed by the association of the Swiss Confederation after they took possession of the Locarno. 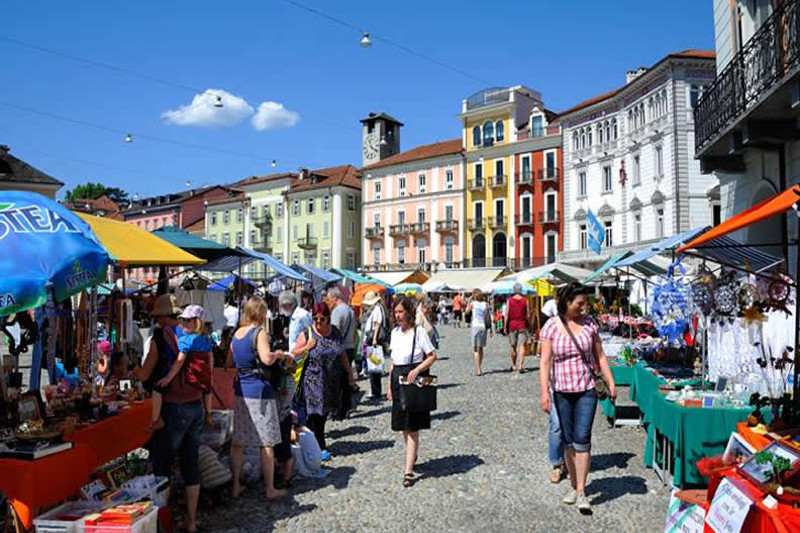 Locarno is the northernmost town on the Lake Maggiore, while the most southerly place in Switzerland.

It is located near Ascona and the Gotthard route. The city in distinctive ocher and yellow painted houses and surrounded by southern European plants such as palm trees or lemon trees, giving the city its special charm. The warmest and sunniest place in Switzerland. Locarno is more than a hundred years a popular tourist destination.

The town is embellished by a twelfth-century dating Castello Visconteo.